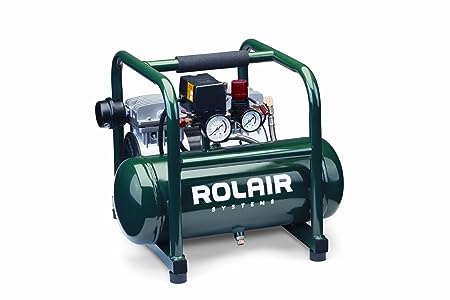 As one of Rolair’s most sought-out portable air compressors, I took some time to test-drive the JC10 unit for my shop. Customers frequently like to know its specs, so I had to be prepared. Whether it’s replacing your old one for causing too much noise or deciding between different types of air compressors, here are some scoops that you need to know. This Rolair JC10 oil-less air compressor review might help you answer some unanswered questions, so here goes.

Here is a short video review of the Rolair JC10 Oil-less Air Compressor:

I’ll start with the pluses. Your noise problems are over, if you ever had them. Though at some point I think you did. Old air compressors seem like they are taking your house down, or neighbors thinking that there’s an earthquake going on. In fact, at 60 dB, I believe you can’t find anything quieter. And the reason it’s quiet is because the motor operates at a max speed of 1725 RPM.

Speaking of which, the motor has 1 HP, and other specs include low-amp draw (8), making it easier to start under colder conditions; pushing air at 2.35 CFM at 90 PSI, which is suitable for anything up to medium duty work.  With 70% duty cycle, the compressor can run for ~7 minutes uninterrupted out of 10 before overheating. You needn’t occupy your mind with counting, there’s a protective circuit that tells you when it needs a shut-eye.

The motor is also connected with a braided line (very practical against damaging), as opposed to a copper line which most compressors use, making it very easy to replace if you ever need to. Unplugging the motor releases the head pressure, and plugging it in again restarts the motor immediately, which I find pretty nifty.

JC10’s design is innovating. To start off, the roll cage offers good protection against damages, protecting the motor, the gauges, the valves etc. when moving it around from place to place. That’s what makes it so portable-friendly. There’s also a handle mounted at the center for an added ease of transport.

What’s it used for? For a portable compressor, its intended use is limited to pin or brad nailers, staplers, die grinders, framing guns, finish guns etc. Basically, anything that consumes low amounts of air. To be on the safe side, first make sure you have and know what tools you are using, and then decide which air compressor you want to go with. But see to it that it’s not too noisy, trust me; I’ve had enough of that scene.

As for dimensions, it’s 16” in width, 15” in height, and 17” in length. The tank’s capacity is 2.5 gallons. To say the least, it’s very convenient when working in confined spaces with little room to breathe. As for its own ‘breathing’ rhythm, the compressor uses the 2.5 gallons of tank capacity pretty quickly depending on what you are working on, and it can be refilling every 20 to 30 secs. I counted anything from 7 to 11 nails fired in succession before I had to give it a little bit of rest to refill.

At the time of purchase, it has a 1-year warranty, which many find too short. However, reports of malfunctioning are scarce — personally, I haven’t had customers complaining about it.

When you finish your work, there’s an easy-to-access drain valve at the bottom of the tank that you need to open. Moisture is a by-product of compressed air in the tank, so that’s on the daily maintenance to-dos list if you don’t want the tank to form rust from all that moisture.

You’ll notice an air filter in the package that is attachable to the motor. Your garage or workshop is basically a playground for dust and dirt, so what the air filter does is keeping the motor and compressor pump clean.

Maintenance seems pretty easy. I haven’t actually had to do any maintenance myself thus far, except for the obviously routine must-dos. But being an oil-less compressor tells me I won’t have to get my hands too dirty to do any actual cleaning. There’s a manual that contains details on how to maintain it by following schedule charts, and it’s recommended that you read it before use.

The Not So Bad

Honestly, I have yet to find a single major downside to using the JC10 unit. Admittedly, the rubber feet that absorb vibration are the only thing that comes to mind. But, smudges can be easily wiped using a rag, so you might want to place it over something that can either be discarded afterwards or is washable.

Come to think of it, the gauges are oddly placed, facing laterally instead of upwards, so I literally have to twist my head around or tilt the unit to the side to make out the readings on them while being placed on the ground. I only wish they were a bit angled or slanted.

Not a bad thing per se, but it’s one of the Rolair compressors not entirely assembled and composed in the US. Its place of origin is China; however, it is being tested in the US before shipping. So, don’t pay attention to the rumors.

Weighing at 39 pounds —a bit on the heavier side — makes it an all-round air compressor on the market. It being heavy-ish is justified by the fact that the manufacturers didn’t go cheap on metals, focusing more on longevity rather than price range.

It’s easy to make a pass at this compressor given its weight, but it’s not a deal breaker. You can actually talk when it’s running, has a design that offers great protection and its low-amp draw will allow you to run other appliances other than the JC10 unit. It’s also oil-less, so no more sticky hands. Rest assured this unit has yet to disappoint unlike many I’ve tested in my shop. Better safe than sorry, in my opinion. There you have it, hope that provided a little insight into this little bugger. I’m James J. Decker, a hobbyist and DIYs and also a big of home improvement and gardening tools. I immensely enjoy how these amazing products improve productivity and efficiency, and allow me to do jobs for which I would’ve otherwise needed professional help. Scroll back to top
0shares
Go to mobile version